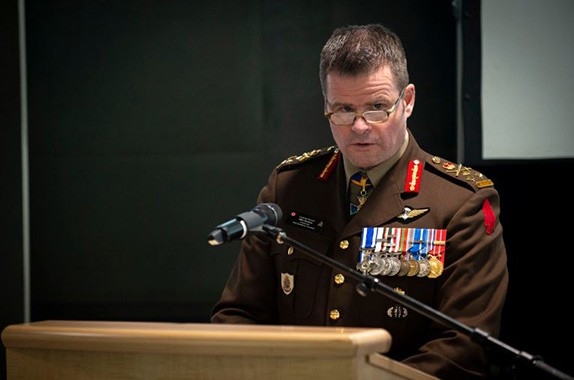 “As a result of this incident, I am stepping aside immediately as (vice-chief of the defense staff) and will transition to the Canadian Armed Forces (CAF) Transition Group. Major-General Frawley will serve as (acting vice-chief of the defense staff) until Lieutenant-General Allen assumes command. I am acutely aware of the tumultuous times we are navigating together,” Rouleau said in a statement on Monday.

Rouleau reportedly joined Vance at the Hylands Golf and Country Club in Ottawa on June 2, along with Commander of the Royal Canadian Navy Vice-Admiral Craig Baines.

Rouleau said he invited Vance to play golf “to ensure his wellness”.

He insisted he and Vance did not discuss anything related to ongoing investigations during their outing.

“I understand how such an activity could lead some to perceive a potential conflict of interest and controversy, given the current context, but nothing can be further from the truth,” Rouleau said in his statement.

As vice-chief of the defense staff, Rouleau has authority over the military’s provost marshal.

The provost marshal is in charge of the Canadian Forces National Investigation Service (CFNIS), which is investigating Vance over allegations of inappropriate behavior, which the latter has denied.

Rouleau said CFNIS investigations are “completely independent” from his office and that he has never interfered with an investigation, including those into allegations of sexual misconduct.

“I have no power over any military police probe whatsoever.”

Military police launched an investigation into Vance in early February following his retirement.

Shortly thereafter, his successor Admiral Art McDonald stepped aside voluntarily as an investigation was underway into his behavior.

Both have denied any wrongdoing Major Gen. Dany Fortin, the public face of Canada’s vaccine rollout since last November, is also facing a sexual misconduct claim against him that dates back more than 30 years.

Earlier Monday, Deputy Prime Minister Chrystia Freeland said she was “disappointed” upon hearing of the event and that the three men showed “very poor judgment”.

“I absolutely understand and sympathize with the sentiment that men and women, but maybe especially women serving in the CAF, have having seen this, and the concern that it causes them to have about the possibility of real fairness for them,” Freeland said.

129 new COVID-19 cases and 5 more virus-related deaths were reported in Ontario today.13,644 Covid-19 tests were processed in the past 24 hours in...
Read more
Canada

119 new COVID-19 cases and 3 more virus-related deaths were reported in Ontario today.11,930 Covid-19 tests were processed in the past 24 hours in...
Read more
Canada

A record number of 40,000 immigrant families will be allowed to sponsor their parents and grandparents to bring them to Canada in 2021.This means...
Read more

Afghanistan's Ministry of Foreign Affairs has welcomed the recent Human Rights Watch and other verified independent sources' report on documenting the Taliban's violence and...
Read more

Actor Sidharth Malhotra, who is portraying Kargil war hero Captain Vikram Batra (PVC) in the upcoming film 'Shershaah', says that it was not only...
Read more